The Hawkeye State of Iowa gets its name from the “Ioway” tribe of native Americans who once inhabited the state.

Map of Iowa portrays the geography of the state to enable the fastest possible orientation of its urban space. State capital Des Moines and other major towns are labeled with readable fonts in their true location. Terrain features are also highlighted and captioned.

The map is furnished with three additional insets of major settlements which include State capital Des Moines, Cedar Rapids and Sioux City. Road networks and points of interest are marked prominently in each frame. 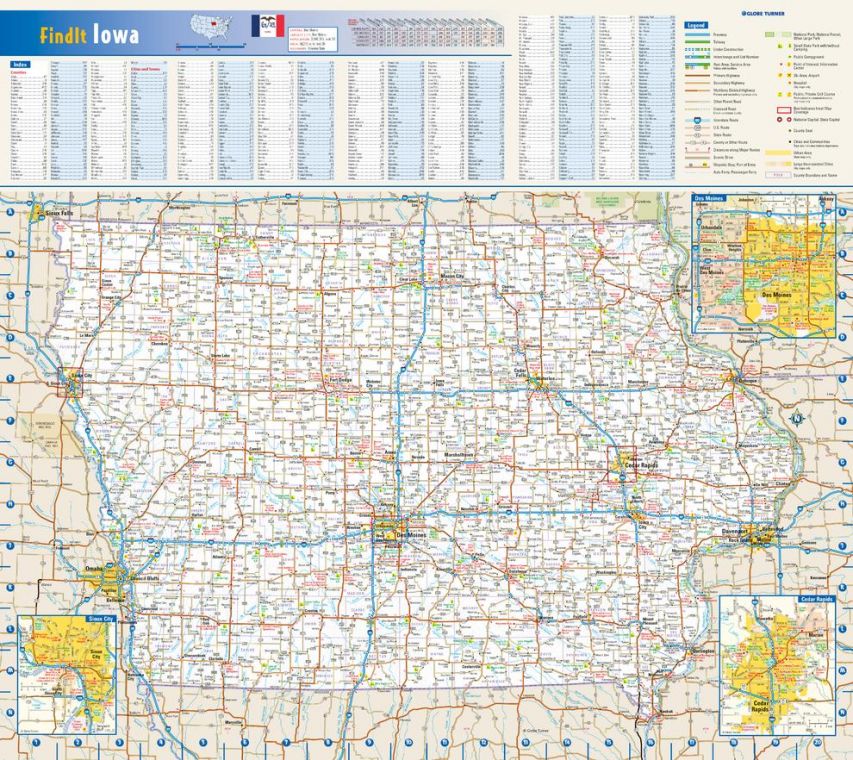 This graphical representation of the state of Iowa is not only perfect for general reference but makes an attractive display in any space. It features urban geography with high-end detailing, displaying interlinking transportations networks, numbered highways, and placements of all primary and secondary towns and cities.

Topographical details like the Mississippi river plains, lakes, savanna uplands, prairies and central grasslands can be spotted without an effort. The state capital Des Moines and other major urban settlements like Cedar Rapids and Sioux City are laid out in separate insets. Each city frame is designed with latest street information and accurate landmark locations.

This comprehensive map poster of Iowa comes in high-quality print with various finishing options. It is furnished with two detailed indices of towns /cities and county. A driving distance marker helps estimate the distance between town and cities marked on the map. The map face also provides the Country placement of Iowa along with digitized flag of the state.

Other aspects of the map include a numbered highway system, airport location, rail routes, parks, recreational area, and military installation. A useful legend simplifies symbolic details of the title frame.