This large scale thematic map of Tennessee enables an easy orientation of urban space. Tennessee is officially nicknamed the “ The Volunteer State”, because of the contribution made by volunteer soldiers during the war of 1892. State Capital Nashville, Memphis, Knoxville, and Chattanooga are drawn out separately on insets.

Another inset brings out the physical layout of Northeastern Tennessee. Information provided by these city maps include street network, parks and other landmarks. 100s of other cities are named in their true location.

This geographical guide comes with various finishing options and comprehensive detailing makes it a great tool for reference. 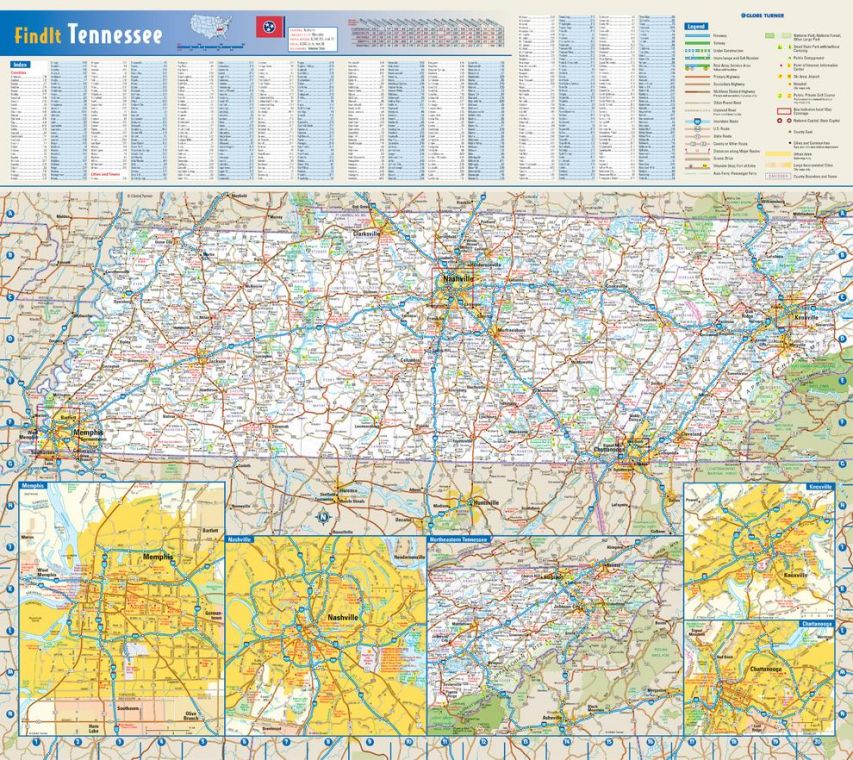 Tennessee is the 36th largest and the 16th most populous state of the United States. The visual organizer features the urban geography of the state inviting curiosity and learning. Political boundary with other states is clearly depicted with colored contours and defined margins. The state capital, Nashville and names of other primary settlements and secondary towns and cities are printed in readable fonts and are easily identifiable. Road network, thoroughfare, frees and tollways are presented with specific numbering and thread markings.

The map layout shows the physical topography of Northeastern Tennessee and includes inset maps of urban settlements like Nashville, Memphis, Knoxville, and Chattanooga. Major terrain markings, airports locations, points of interest, State parks, national parks, and historical sites are other details of this intricate layout. The map is also furnished with a tabular index of towns and cities, a county index and driving distance chart marked in miles, which helps locate all primary and secondary towns on the map.

The geographical regions of the state include The Blue Ridge characterized by high Mountains, The Appalachian Ridge and Valley region, The Cumberland Plateau, the Highland Rim surrounding the central basin, the Nashville Basin or the central basin and the Gulf Coastal Plains. Other terrain markings include the Smoky Mountains, Unaka Mountains, Unicoi Mountains, Cherokee National Forest, Tennessee River, Mississippi River and the Gulf of Mexico. The State also holds the highest number of caves in the nation.

The expanse of the title frame is elaborated with terrain placements and interlinking networks of highways and state roads. Airports, railroads and harbors are also marked prominently. Political demarcations with bordering States are specified with contrasting tones.

The map is also furnished with a tabular index of towns/ cities and county. A driving distance marker helps estimate distance. A miniature map of the United States pinpointing the placement of Tennessee and digitized flag of the State are other interesting details of the Map.

The Great Valley region has a concentration of urban population. The major cities of Knoxville and Chattanooga are both located in this region. Many other primary and secondary towns are also marked on the frame for quick reference. The Great Smoky Mountains National Park, the nation's most visited national park, is located in the eastern part of the state.

Uses of the Map:

The Map Tennessee can be used resourcefully for different purposes.