This large scale thematic Alabama map enables an easy orientation of urban space of the state. Densely settled towns like Birmingham, Huntsville, Mobile, Montgomery and Tuscaloosa are drawn out separately on insets. Information provided by these city maps include street network, points of interests and other landmarks.

The expanse of the title frame is elaborated with terrain placements, primary and secondary cities and interlinking networks of highways. Political demarcations with bordering States are distinctly marked with contrasting tones.

With attractive imagery and comprehensive detailing the map can dresses up any space with information and elegance. 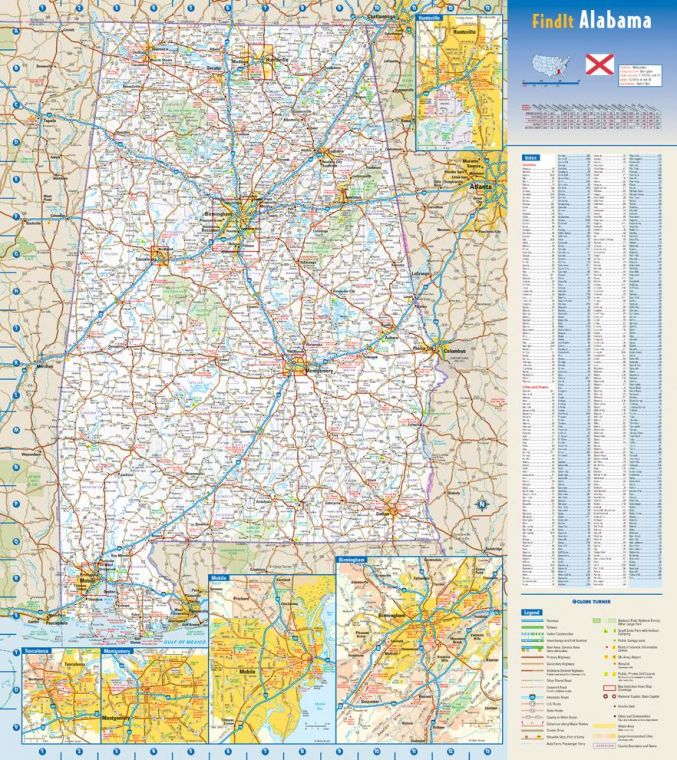 Featuring the urban and political geography of the state, this map frame portrays an elaborate know-how of the State of Alabama. Political boundary with other states is depicted with high contrast color and can be pictured at a glance. The state capital Montgomery and other primary and secondary towns are captioned in their actual location. A box highlighter indicates inset map coverage of five major settlements.

The interlinking network of National highways, state highways, other roads, thoroughfare, frees and tollways are presented with specific number and thread markings. Airports, points of interest and county demarcations can also be placed on the map with ease. The physical features like the mountains, plains, canyons, national parks, state parks and protected areas are marked with accuracy.

The Gulf of Mexico can be placed prominently in the southern tip. The map is also furnished with a tabular index of towns and cities, a county index and driving distance chart marked in miles, which helps locate all primary and secondary towns on the map.

The topography of the State consists mainly of large plains but northern Alabama is mostly mountainous. The Tennessee River can be seen creating numerous creeks, streams, rivers, and lakes. The Gulf of Mexico can be placed at the southern tip and the Appalachian ranges can be placed in the northeastern part of the state. The highest summit of Alabama is Mount Cheaha.

National Parks, State parks, recreational areas, preserves and wildlife preserves of Alabama are captioned and sketched out prominently on the map, indicating placement.

The map is also furnished with a tabular index of towns/ cities and county. A driving distance markers help estimate distances between destinations. A miniature map of the United States pinpointing the placement of Colorado and digitized flag of the State are other interesting details of the Alabama Map.