Louisiana is named after the famous French King, Louis XIV and it means “related to Louis”.

Perfect for homes and offices this map of Louisiana is modeled in lively colors, depicting the urban layout of the State. The expanse of the State is elaborated with placement of cities and towns.

This elaborate map poster is furnished with two indices. A driving distance chart miniature map of the United States pinpointing the placement of Louisiana, along and a digitized flag of the State.

This Map makes an ideal reference tool because of its accurate data and clear depiction. 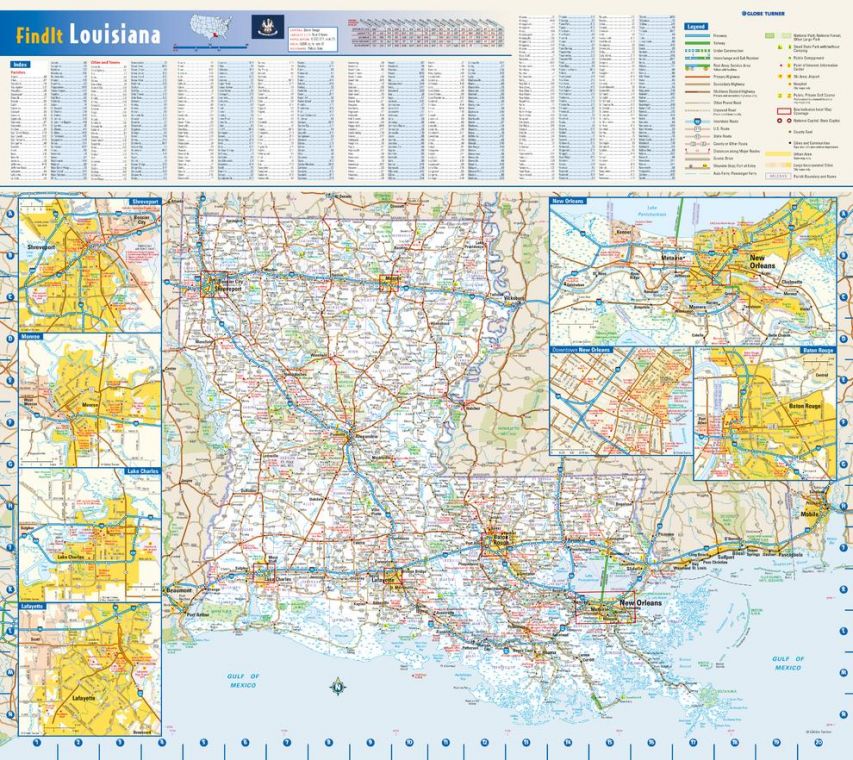 Designed with accuracy using current map data, this Map of Louisiana is a high quality image of the urban layout of the state. Boundaries with other states are demarcated with contrasting contour. All primary and secondary cities and towns are named in their true location for easy understanding. Highlighted box frames indicate placements of major settlements which are elaborated in separate insets.

The State Capital Baton Rouge is captioned in bold readable fonts and can be placed easily. National highways, state highways, airports, military installation and recreational areas are other details that are included in the map. The physical landscape is depicted with attractive imagery and variation in color. Mountain ranges, highlands, significant water bodies, mountain peaks, forestlands, national parks and State parks can be placed on the frame with ease. This informative and attractive visual display of the State is a great reference tool and can be used resourcefully in schools, homes and offices.

State boundaries are clearly differentiated. State capital Baton Rouge and some major settlements are highlighted with box frames in their true location and elaborated in insets. Each inset shares information on the transportation network and points of interests in the city.

The two terrain regions of Louisiana include the uplands of the north and the alluvial coastal plains. The Mississippi River and its two tributaries Red River and Ouachita River can be seen flowing through the state. Driskill Mountain is the highest natural summit of Louisiana and can be placed in the northwest part. The State is home to many areas protected by the national park system and these areas have been indicated on the map with clarity.

Capital city Baton Rouge can be placed on the eastern banks of the Mississippi River. It is also the second largest city in the state. The map design is complete with separate insets five major settlements which include Baton Rouge, Fayetteville, Lake Charles, Monroe and New Orleans Each inset elaborates in detail transportation network and landmark locations. Highways are numbered and demarcated with specific colors. Military areas, airports, park, recreational areas and points of interest are also indicated for quick reference. Two tabular indices of cities/town and county and a driving distance chart helps estimate distance in miles between towns and cities marked on the map.

The map is furnished with a tabular city/ town index, a county index and a driving distance chart marked in miles, which helps locate all primary and secondary towns on the map.