Maryland is nicknamed the “Old Line State”, to commemorate the action of 1st Maryland Regiment who fought bravely against a superior British Force during the Battle of Long Island.

The map of Maryland provides an overview of the state’s topography with prominent markings. The famous Chesapeake Bay. Hoye-Crest, principal rivers Potomac and Patapsco, Allegheny Mountains, Blue Ridge Mountains and Deep blue Creek lake are other terrain features that can be found on the map. Parks, preserves, historical sites and wilderness areas are captioned clearly.

The map is also furnished with a city town index, County index and a driving distance chart. Placement of Maryland in the national frame is depicted with a miniature map of the US along with a digitized flag of the State. 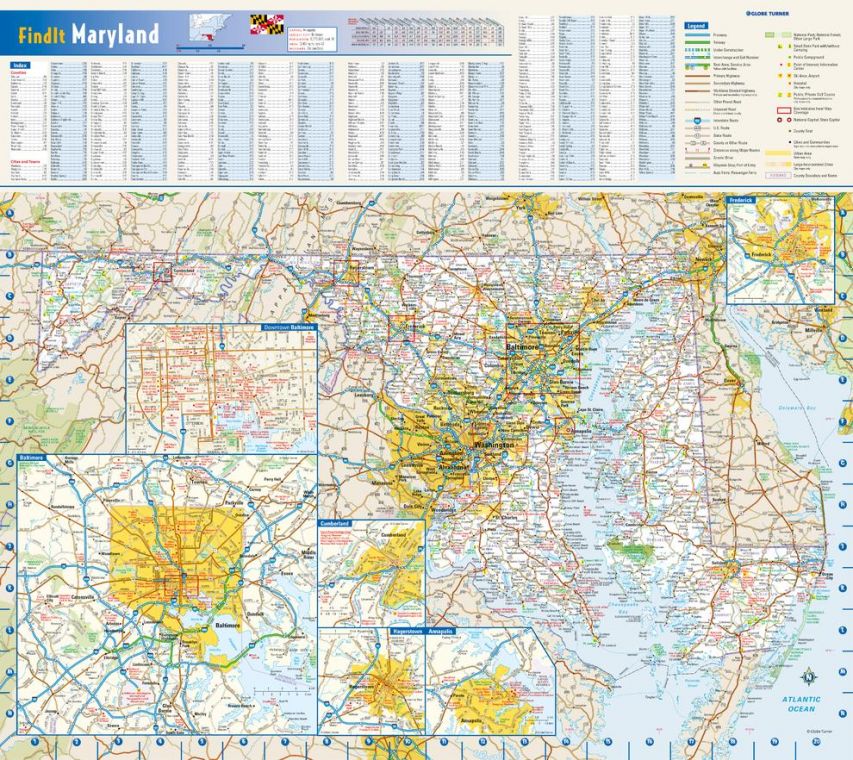 Designed with accuracy using current map data, this Map of Maryland is a high quality image of the urban layout of the state. Boundaries with other States are identifiable with contrasting contour. The map encompasses all primary and secondary cities and towns and a driving distance marker which helps understand mile gaps between destinations.

Highlighted box frames indicate inset map coverage of major urban settlements of Annapolis, Baltimore, Cumberland, Frederick and Hagerstown. National highways, state highways, freeways, tollways, intersections, airports and recreational areas are other details that are included in the map. The physical landscape is depicted with attractive imagery and variation in color.

The Chesapeake Bay and its tributaries, principal rivers Potomac and Patapsco, Allegheny Mountains, Blue Ridge Mountains and Deep blue Creek lake and the highest summit Hoye-Crest are marked with prominence. Other features like national parks, state parks, military installations and forest areas can also be easily placed. With a wonderful combination of political and physical features, this Map of Maryland makes a perfect geographical guide for reference and display.

The state of Maryland is graphically represented with cartographic excellence depicting the urban and political placements. The expanse of the map is elaborated with location of towns, cities and boundaries demarcations. Clear labeling and simplified symbolic data, makes this map perfect for business, homes and administrative offices. Box highlighters indicate inset map coverage of major urban settlements with details of road network, points of interest and rest areas.

Maryland gets its name from the Queen Mary of England, the wife of King Charles I. Capital city Annapolis can be placed in the Chesapeake Bay region and prominently marked. Baltimore is the largest settlement of Maryland and is marked in its true location along with hundreds of other primary and secondary towns and cities.

The most populous region is the Baltimore metropolitan area which combines seven counties. The map is also furnished with a city town index, county index and distance markers which help locate the smallest town on the frame.

The map is also furnished with a city town index, County index and a driving distance marker which help locate all primary and secondary towns.The key table elaborates symbolic data like national parks, State parks, points of interest, highways, important roads, airports and other details of the title frame.