This thematic map of Pennsylvania, designed by Globe Turner, is perfect resource aid for offices, homes and educational institutions. It presents an overview of transportation networks interlinking the state along with names of all primary cities and towns printed in readable fonts.

The placements of these urban settlements are highlighted with box indicators in the title frame. Points of interest, parks, road information like thoroughfares, freeway tollways, interchanges and airports locations are marked prominently in each inset.

The Map is furnished with two detailed indices and a driving distance chart marked in miles helps understand travelling time between places marked on the map.

This map is available in 25 x 24 in. Please select a finish of your choice
Please wait, adding to your cart
Please wait, initializing the product
Add to Compare
Email 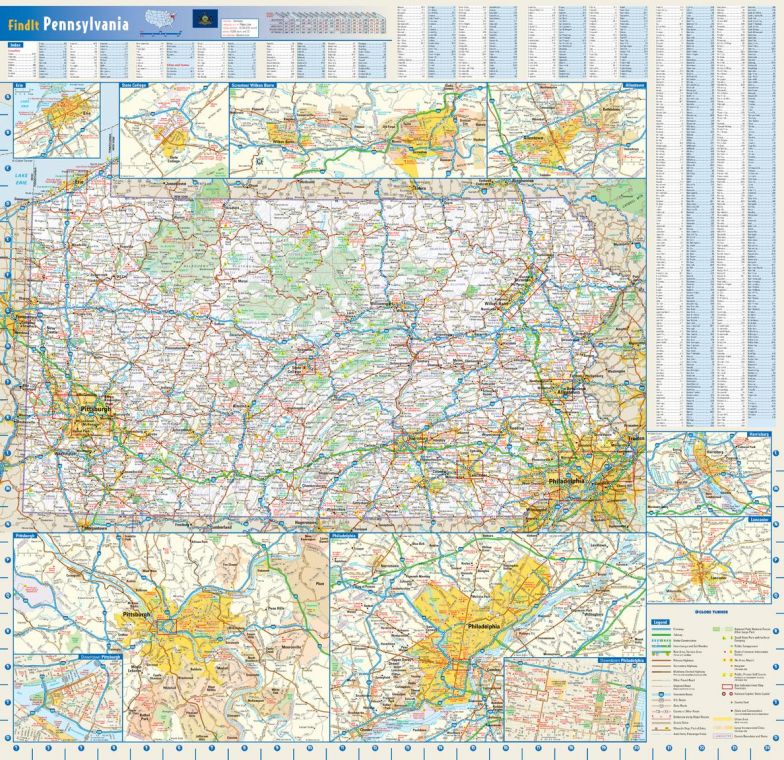 The thematic map of Pennsylvania is a detailed representation of urban features of the state. Elaborate detailing of road network, accurate placement of towns and cities and precise markings of terrain features makes this map ideal for reference use. Highways are numbered and illustrated with colored lines for quick understanding.

Boundaries with other states are also defined with contrasting tones. The map is complete with comprehensive detailing of 10 major settlements which have been laid out separately in insets. They include Allentown, Erie, Harrisburg, Lancaster, Philadelphia, Pittsburgh, Scranton/Wilkes-Barre, Muncie, and State College. The placements of these urban settlements are highlighted with box indicators in the title frame.

Route maps, freeways, tolls ways and other major roads are also drawn out clearly in each inset. Airports locations, national parks, state parks, recreational areas and other points of interest are also indicated for easy understanding. . The map is also furnished with a city town index, County index, distance markers, miniature map of the US indicating the placement of Pennsylvania along with a digitized flag of the State.

Pennsylvania is the 33rd largest and the 5th most populous state in the nation. The capital of the state and its 10 largest city Harrisburg is captioned with large fonts and can be placed on the map with ease. The State is divided into 67 counties. The largest county in terms of land area is Lycoming and the most populous county is Philadelphia County followed by Allegheny.