The state is named after the Missouri River and derived from the Siouan word meaning “ Those who dugout canoes.”

Designed with accuracy using current map data, this Map of Missouri is a high quality image of the urban layout of the state.

The transportation network interlinking the state is laid out elaborately with numbered highways.

The map of Missouri also provides an overview of the state’s topography with prominent markings. The Ozark Mountains, St Francois Mountain, Mississippi River, and Missouri River are other terrain features that can be found on the map.

This map is available in 32.75 x 18.25 in. Please select a finish of your choice
Please wait, adding to your cart
Please wait, initializing the product
Add to Compare 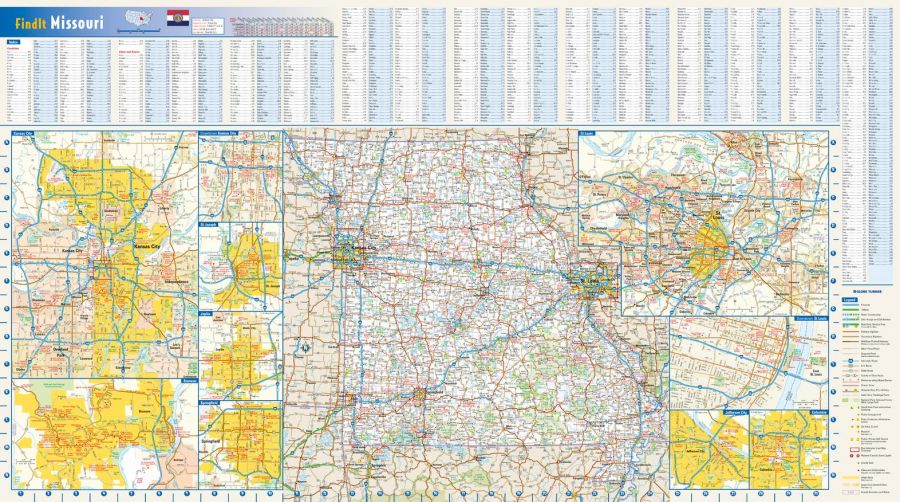 The state is named after the Missouri River and derived from the Siouan word meaning “ Those who dugout canoes.”

The State map of Missouri is graphically represented with cartographic excellence depicting the urban and political placements. The expanse of the map is elaborated with location of towns and cities, state boundaries and county demarcations. Clear labeling and simplified symbolic data, makes this map perfect for business, homes and offices. Box highlighters indicate inset map coverage of major urban settlements with details of road network, points of interest, parks and recreational areas.

Numbered highways system, Road ways, airport locations, rail routes, waterways, parks are other transport related information that are included in the map. The physical landscape is depicted with attractive imagery and variation in color. The Ozark Mountains, St Francois Mountain, Mississippi River, and Missouri River wilderness areas, national parks and State parks are captioned and can be identified at a glance. The Missouri map is a wonderful combination of political and physical layout of the state perfect for geographical reference in classrooms, offices and home.

The Missouri map is also furnished with a city town index, County index, a driving distance chart, miniature map of the United States pinpointing the placement of state along with a digitized flag. A useful legend explains the symbol of population concentration, primary and secondary roads, airport location, state boundaries, time zones and boundaries.

The map feature includes 8 informative insets of major urban settlements of the state. Each frame is complete with the latest street information, waterways, rail routes and airports. Accurate locations of landmarks, notable architecture, historical sites, utility and civic centers are indicated with clarity. Parks and forest areas are easily recognizable in each frame with green patches and specified symbols elaborated in the legend.

The map is also furnished with a city/town index, County index and a driving distance chart, which help locate all primary and secondary towns. The legend elaborates symbolic data like national parks, State parks , points of interest, highways, important roads, airports and other details of the title frame.

This map poster is available in four different finishes which include, paper, Matte Plastic, laminated and Canvas in high quality prints.