State boundaries and international divides are demarcated with bright-line indicators. The transportation network of the region is illustrated with numbering and symbolic data. Designed by National Geographic this map makes an exceptional exhibit and is a part of Atlas of the World, 10th Edition. 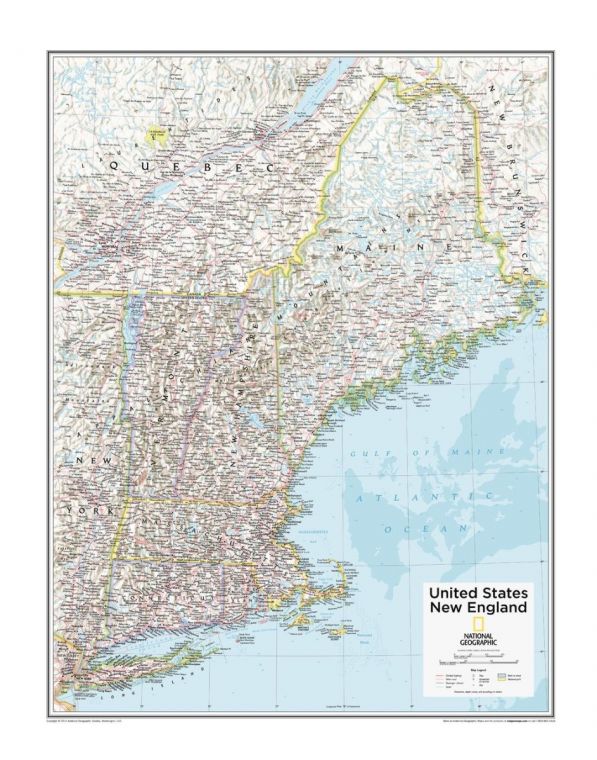 The New England Map of the U.S. designed by National Geographic is a preferred piece being widely used. It elaborates the political and physical description of the New England Region of the United States. Maine, Vermont, New Hampshire, Massachusetts, Rhode Island and Connecticut are the six states that constitute this sector.

The political divisions of each State and international boundaries are projected with contour lines. Significant water bodies are captioned in large fonts. Other terrain markings like mountains, lakes, rivers, and valleys are accurately placed and can be identified at a glance. The transportation network of this sector is sketched out neatly with numbered highways, color-coded route chats, and symbolic indications of airport locations.

This comprehensive map of the New England Region of USA is not only ideal for general reference but with its engaging color scheme, this map poster also makes an elegant display in office spaces, home studios, and business centers.

More about the New England States

Maine: Augusta The state capital is located on the banks of the Kennebec River. Maine has 16 Counties, the largest county by population in Cumberland County. Portland is the most populous city in the state. The State falls under the Eastern The range of Zip codes in Maine is from 03901-04992.

Vermont: Montpelier is the capital of Vermont whereas Burlington is the most populous city. The state is divided into 14 counties. The most populous county is Chittenden whereas Windsor is the largest county in terms of land area. The Zip Code range of the state is 05001-05907.

Connecticut: Connecticut is the third smallest state in terms of area and the fourth-most densely populated state in the USA. Nicknamed “New England’s Rising Star”, Hartford the state capital is also the core city in the Greater Hartford Metropolitan Area. It is the fourth largest city of the State and is one of the oldest cities in the nation. Connecticut is divided into 8 counties. Four of the counties of Fairfield, Hartford, New Haven, and New London were created in 1666. The range of Zip codes in Connecticut is from 06001- 06068.