Modeled in soft tones this North Central U.S Map stands out for its detailing and visual imagery. The region encompasses the states of Iowa, Kansas, Minnesota, Missouri, Nebraska, North Dakota and South Dakota. Each state is clearly demarcated in their true proportion with framed margins.

State Capitals and major cities are named to indicate placement. Significant terrain features are captioned and depicted with preciseness. Transportation routes interlinking this sector are drawn out with clarity. This perfect reference tool has been designed by National Geographic and is a part of the Atlas of the World, 10th Edition. 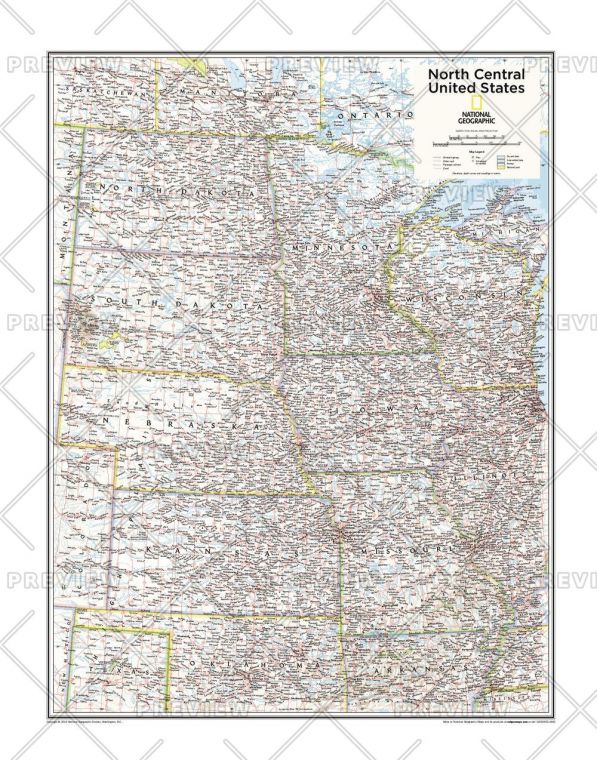 This Map of North Central U.S is a cartographic excellence ideal for general reference and factual citations. The vastness of this region is elaborated with prominent political and topographical markings. The states of Iowa, Kansas, Minnesota, Missouri, Nebraska, North Dakota and South Dakota, encompassing this region are demarcated clearly in their true proportion.

Significant water bodies and mountain ranges are notably marked in bold, readable fonts. Transportation network is elaborated with numbered highways, color coded route charts and airport locations. An informative key table is added to the exhibit which helps understand symbolic representations in the title frame. This Map is designed by expert map makers of National Geographic and is a part of the Atlas of the World, 10th Edition.

More about North Central US States

The North Central US region comprises seven states which include Iowa, Kansas, Minnesota, Missouri, Nebraska, North Dakota and South Dakota. They are also known as the Great Plains states and regarded as the core of the “Farm Belt” of the Nation.

Iowa: The Hawkeye State of Iowa gets its name from the “Ioway” tribe of native America who once inhabited the state. Iowa has a large urban settlement. It is divided into 99 counties. The largest county in terms of area is Kossuth. Des Moines is the state capital and also the most populous city. The Zip Code range of the state Iowa is from 50001-52809.

Kansas: The state of Kansas derives its name from the “Kaw Nation”, a group of native American tribes who lived along the banks of River Kansas. It falls under the grain belt and is the 15th largest state in terms of area. The capital city is Topeka which can be placed in the north eastern part of Kansas whereas the largest city, Wichita. The state is divided into 105 counties. The largest county in terms of area is Butler County. Johnson County is the largest county in terms of population. The Zip codes in Kansas range from 66002-67954.

Missouri: The state is named after the Missouri River and derived from the Siouan word meaning “ Those who dugout canoes.” Capital of Missouri is Jefferson City and the largest metro is Greater St Louis whereas Kansas is the largest urban settlement. Missouri has 114 Counties and one Independent City which is St Louis. St Louis is also the most populous county of the state and Texas is the largest county in terms of land area. There are 92 parks and historic sites in Missouri. The zip code range of the state is 63001-65899.