The Oregon State Map depicting the urban layout is an instant favorite because of its warm attractive colors combined with in-depth factual detailing. State capital Salem and all primary cities are marked with correctness. 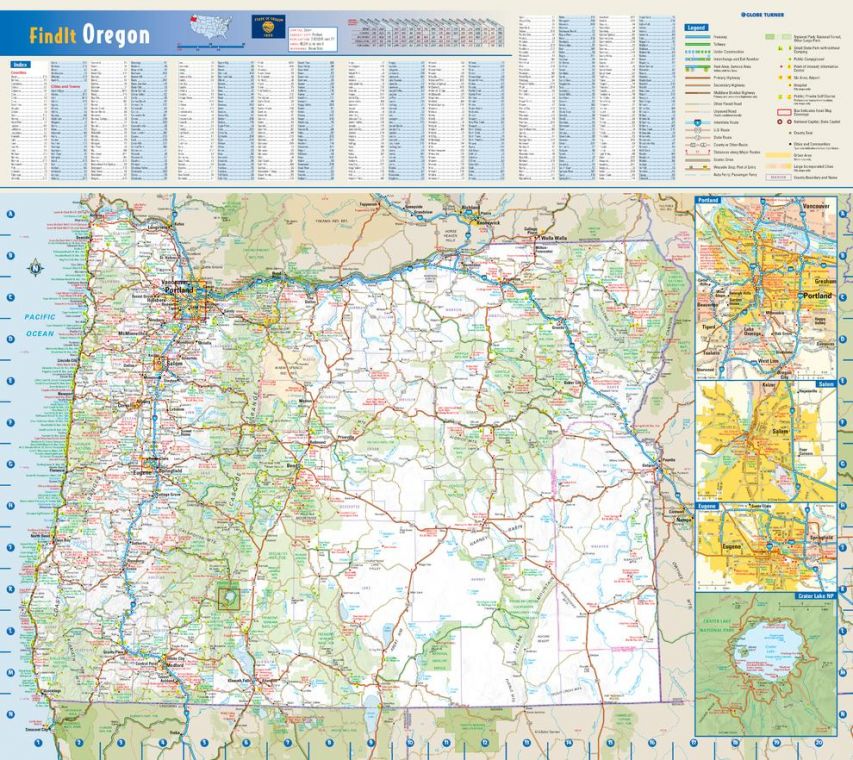 This urban political map of Oregon aims to broaden our knowledge about the state with visual learning. Well researched data makes this map perfect for general reference and display. In planimetric layout the map shows clear boundary demarcations, placement of state capital Salem along with major cities and towns. The diverse physical features of the state is marked with preciseness and accuracy.

Other significant terrain features include Mount Hood, Upper Klamath Lake and Crater Lake. Transportation network is systematically laid out with specific numbering and color coded route charts. National parks, state parks, forest areas, natural spaces and recreational areas also form a part of the scheme. Highlighted box markings of important settlements are depicted in insets. The city layout of Salem, Portland and Eugene contain road information, points of interest, parks and historical sites. A separate inset draws out in detail the layout of Crater Lake National Park, the only national park of Oregon. The map is also furnished with a tabular index of towns and cities, a county index and driving distance chart marked in miles, which helps estimate distance between places.

The map highlights placements of major urban settlements with box indicators which are elaborated in insets. This includes the city layout of State Capital Salem, Portland and Eugene. Each inset contains the latest street information, landmark locations, natural spaces, state parks and recreational areas. Crater Lake is the only National Park of Oregon’s is also elaborated in a separate inset.

This comprehensive map poster comes in high quality print with various finishing options. It is furnished with two detailed indices of towns /cities and county. A driving distance marker helps estimate distance between towns and cities marked on the map. The map face also provides the Country placement of Oregon along with digitized flags of the state.

The map feature includes three elaborate insets of major urban settlements of the state which include state capital Salem, Portland and Eugene. Each frame is complete with the latest street information, waterways, rail routes and airports. Accurate locations of landmarks, notable architecture, historical sites, utility and civic centers are indicated with clarity. Parks and forest areas are easily recognizable in each frame with green patches and specified symbols elaborated in the legend. A separate inset draws out detail of the Crater National Park, which is the only National Park of Oregon.

The map of Oregon depicts the diverse physical features of the state with preciseness and accuracy. The state is divided into six geographical regions which are the Coast Range, the Willamette Valley, the Cascade Mountains, the Klamath Mountains, the Columbia Plateau, and the Basin and Range Region The intricate river system includes Columbia River, Deschutes, Willamette River, John Day River, and Snake River. The highest point of Oregon is Mount Hood and the two major lakes are Upper Klamath Lake and Crater Lake.

The map is furnished with a tabular index of town and cities, a County index and a driving distance marker which help locate all primary and secondary towns on the map. The legend elaborates symbolic data like national parks, State parks, military areas, highways, important roads, airports and other details of the title frame.