Appealing and informative this Wyoming Map is a handy reference tool. It is etched with placements of cities, state boundaries and intricate road systems. Urban concentrations like State capitol Cheyenne and Casper are drawn out separately on insets. The Great plains meet the Rocky Mountains in Wyoming. Other terrain features like rivers, plateau, mountains and peaks are depicted with clarity and captioned. Insets of YellowStone National Park and the Grand Teton National Park bring out the varied topography and layout of these areas. Other features of the map include two indices and a distance chart.

This map is available in 16.75 x 15.25 in. Please select a finish of your choice
Please wait, adding to your cart
Please wait, initializing the product
Add to Compare 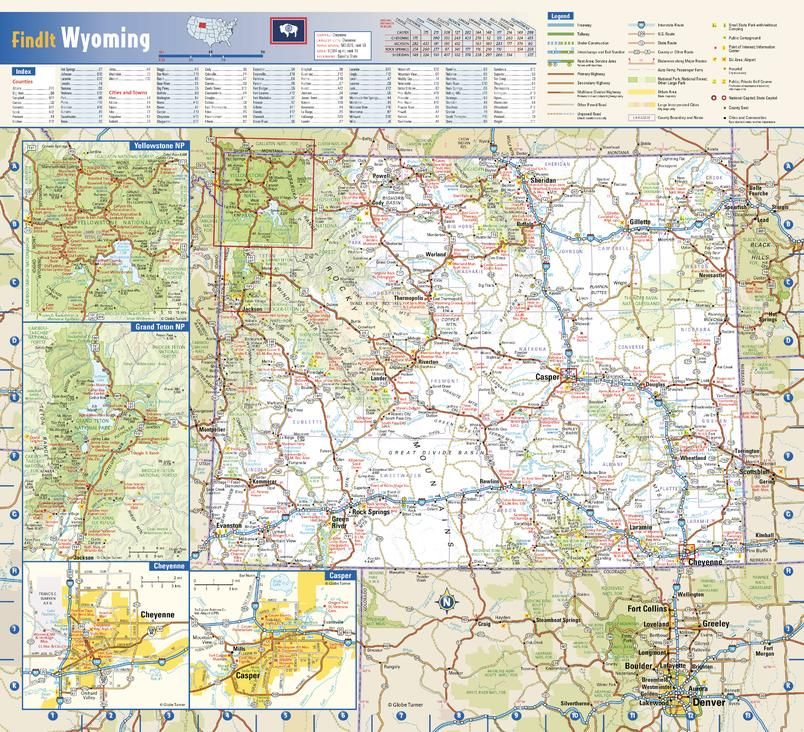 Wyoming was the first state in the United States of America to grant Women the right to vote and also welcomed the participation of women in active politics.

Designed with accuracy using current map data, this Wyoming Map is a high quality image of the urban layout of the state. Boundaries with other states are demarcated with contrasting contour. All primary and secondary cities and towns are named in their true location for easy understanding.

Highlighted box frames indicate placements of major settlements which are elaborated in separate insets. City insets of state capital Cheyenne and the second largest city Casper are complete with latest street information and accurate landmark locations. Numbered highways, airport locations, military installation and recreational areas are other details that are included in the map.

The physical landscape is depicted with attractive imagery and variation in color. Mountain ranges, plateaus, significant water bodies, mountain peaks, forestlands, national parks and State parks can be placed on the frame with ease. Two separate frames draw out the detail layout of YellowStone National Park and the Grand Teton National Park.

The map is furnished with an elaborate key table, two elaborate indices, one of cities/ towns and the other showing counties. A driving distance chart marked in miles, miniature map of the United States pinpointing the placement of Wyoming along and a digitized flag of the State are other interesting details of the map. This informative and attractive visual display of the State is a great reference tool and can be used resourcefully in schools, homes and offices.

Wyoming is the second most sparsely populated states of The US but the 10th largest in terms of area. The State houses two national parks namely the Yellowstone National park and the Grand Teton National Park. It also owns two national recreational sites, two national monuments, many national forests, historic sites and wildlife refuge. Oil and Gas production along with tourism anchors the state’s economy. The institutes of higher education of the state include University of Wyoming and Wyoming Catholic College. National highways, interstate highways and state highways are numbered and color coded. Military areas, airports, recreational areas and points of interest are also indicated for quick reference.

The map feature includes four informative insets. Two depict major urban settlements of Cheyenne and Casper whereas the other two depict the two national parks of Yellowstone and Grand Teton. Each frame is complete with latest street information, military installation, rail routes and airports. Accurate locations of landmarks, notable architecture, historical sites, utility and civic centers are indicated with clarity. Important terrain features are easily recognizable in each frame with specified symbols elaborated in the legend.