Map of Miami, florida uses the base map data from TomTom. The data is updated every 6 months making this one of the most updated printed large map of Miami, FL and its neighborhood areas. This map is available in a scale of 1:49,000 in 36*48 inches. If you want a map with different extents, orientation, or scale, you can do that by customizing the map here. If you have any questions, we will be happy to answer over the phone (866) 525-2298 or write to us
This map is available in 36 x 48 in. Please select a finish of your choice
Please wait, adding to your cart
Please wait, initializing the product
Add to Compare 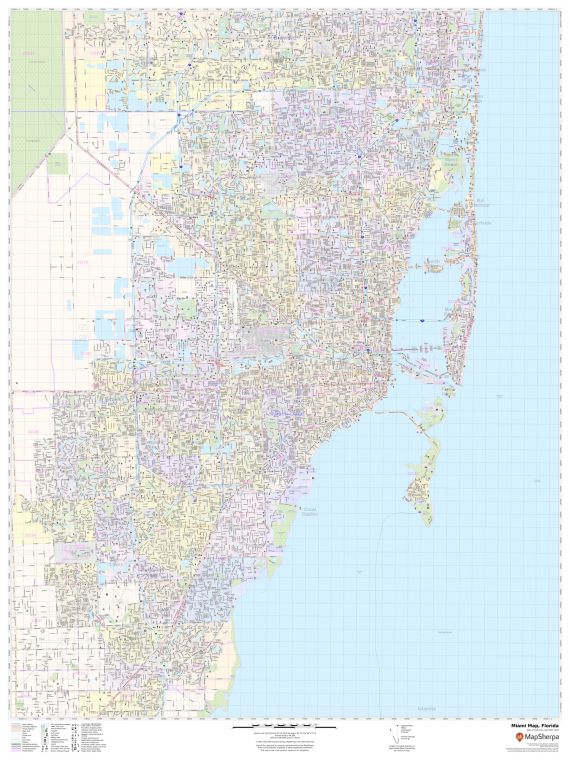 The detailed Miami city map displays Municipal, Town, and ZIP code boundaries. The major roads and highways(I-75, I-95, I-195, I-395, U.S.Route-1, U.S Route-27, U.S Route-41, U.S-441), Metrorail networks, beaches are easily identifiable on the map. A map legend at the bottom helps identify all graphics, signs, and symbols used on the map.

Details on The Map

The regional map by MapSherpa includes display highway infrastructure including interchanges, tolls and weigh stations, Full street labeling, block numbers, and streets with names. Infrastructures such as Airports, hospitals, shopping malls, exhibition centers, industrial complexes, and other business-centric features can be identified in the map.

The Miami map is Portrayed in subtle colors which makes this map an attractive wall display in offices, educational institutions, business centers, and home study. The product is ideal for the business owner who needs a local or regional road network information within a service delivery, catchment area, or a sales territory. The elaborate road networks and description of beaches make this map an ideal tool for general reference and planning long-distance trips.

Miami, officially the City of Miami, is the seat of Miami-Dade County, and the cultural, economic and financial center of South Florida in the United States. The city covers an area of about 56 Square miles (150 Km2) between the Everglades to the west and Biscayne Bay to the East which extends from Lake Okeechobee southward to Florida Bay. Miami is second-most populous in the southeastern United States.

The Gulf Stream, a warm ocean current, runs northward just 15 miles(24 km) off the coast, allowing the City’s climate to stay warm and mild all year. Miami is a major center and leader in international trade, media, and entertainment.

Miami is split roughly into north, south, west, and Downtown areas. The heart of the city is Downtown Miami, which is on the eastern side and includes the neighborhoods of Brickell, Virginia Key, Watson Island, as well as Port Miami.

Greater Downtown Miami has one of the largest concentrations of international banks in the United States and is home to many large national and international companies. The Health District is a major center for hospitals, clinics, and medical research industries. Port Miami is the busiest cruise port in the world in both passenger traffic and cruise lines. Miami is also a major tourism hub for international visitors.