Austin Map, Texas uses the base map data from TomTom. The data is updated every 6 months making this one of the most updated printed large map of Austin and its neighborhood areas. This map is available in a scale of 1:30,000 in 36 x 48 inches. If you want a map with different extents, orientation, or scale, you can do that by customizing the map here. If you have any questions, we will be happy to answer over the phone (866) 525-2298 or write to us
This map is available in 36 x 48 in. Please select a finish of your choice
Please wait, adding to your cart
Please wait, initializing the product
Add to Compare 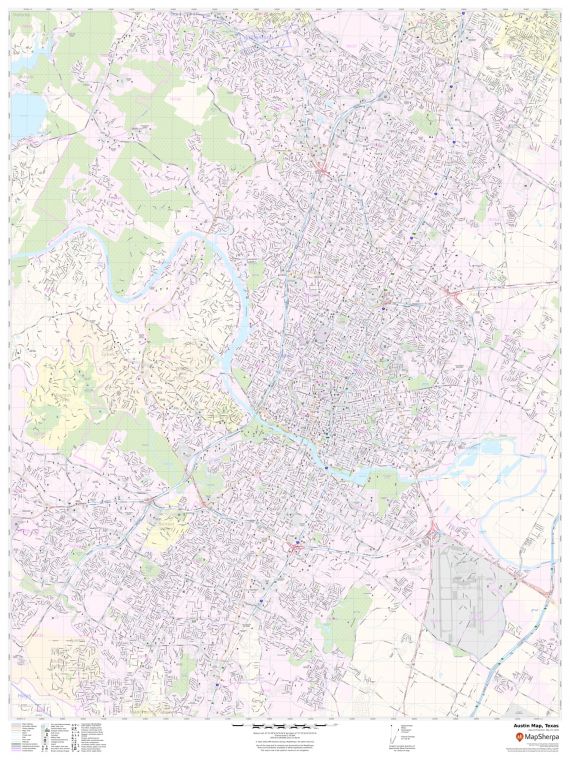 The Austin City, Texas map has been designed with accuracy and based on the well-researched data. The town, municipality, and Zip code areas are demarcated on the map. The map shows street details with clearly marked landmarks, airports, government buildings, schools, churches, important routes, River(Colorado River), and more.

Details on the Austin, Texas Map

The map includes extensive Geographic details. Railways, ferry routes, and high-level land use such as parks and recreation areas; industrial areas; postal districts, and hospital campuses are mentioned at a detailed scale. The base map features all the major roads and highways(I-35, U.S-183) including secondary and Tertiary highways(SH-111, SH-290, SH-71) labeled with neighborhood names.

A map legend featured at the bottom helps identify all signs and symbols used on the map. The scale of the map is 1:30,000. The max print scale of the map is 1:10,000 and the Min Print scale is 1:2,000,000. The customizable map is available in landscape and portrait orientation and various sizes. This high-quality Austin, Texas map is available in various premium finishes including paper, canvas, and laminated. There is also an option of adding the title of one’s own choice in the Map.

Facts and Figures of Austin, Texas

Austin is situated at the foot of the Balcones Escarpment, on the Colorado River, with three artificial lakes within the City limits: Lady Bird Lake, Lake Austin, and Lake Walter E.Long. Austin is located at the intersection of four major ecological regions and is consequently a temperate-to-hot oasis with a highly variable climate. The area is very diverse ecologically and biologically and is home to a variety of animals and plants.

Austin is the capital city of the U.S state of Texas as well as the seat and the largest city of Travis County, with portions extending into Hays and Williamson Counties. It is one of the fastest-growing large cities in the United States and Southernmost state capital in the contiguous United States. Austin is considered to be a major center for high tech. Austin is also emerging as a hub for pharmaceutical and biotechnology companies.

Downtown Austin with the Zip Code 78701 is the central business district of Austin, Texas, Downtown is located on the north bank of the Colorado River. It is where City’s highrise buildings are located, as well as being the center of government and business for the region.